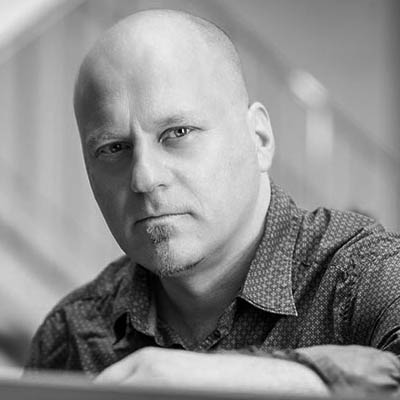 Climatic a.k.a Volker Dorsch, musician, producer and video-artist, was born 1971 in Germany. Already by the age of 16, he gained attention as a keyboarder and composer for live bands that he played with. From 1993 until 1996, he studied jazz piano, drums and percussion at the conservatory in Mannheim.
Later in Cologne, he got extremely fascinated with electronic music, DJs and video art. So he built up his own studio and began to work on his own tracks and remixes. Inspired by acts like Kruder&Dorfmeister, Aphex Twin, The Orb and the likes, yet deeply rooted in Jazz and soul music, he developed his own colourful style, which could be best described as somewhere between Ambient/Downbeat and Deep-House.
Touring as a partner with Naoki Kenji’s Live-Act, he became familiar with the club-scene in and out ot Germany. This Collaboration has also lead to several tracks, as released on Kenji’s album „E-coustic“ or „JP-Juice/Fukai Remixed“, or Kenji’s new album „Akatombo“.
Besides, he is part a new slow music/ambient project „Under One Sky“, which came out in August 2017.
Climatic’s passion for italian music and vocals is obvious, as we can see in songs like „L’Horizzonte“, „La Luna“ or „Solo Parole“, but also in collaborations with artists like Giovanni Costello and Angela Puxi.
Next to his works as electronic musician and film composer, he still loves to perform as a live pianist and keyboarder, keeping his chops alive, and staying connected with the big source of inspiration sharing a stage with other musicians offers him.
Climatic’s first album „Around And About“ was released in 2005, followed by „Incanto“ (2008) and „Ancora“ (2011). Number four, „Duane“ will be released in December 2017, all on 4MPO. His tracks have been released on many compilations, such as „Bar Lounge Classics“, „Cafe Del Mar“, „Las Salinas“, „Deep Wild & Dirty“, and not to forget the legendary „man vs. machine“ tv program on hr3.